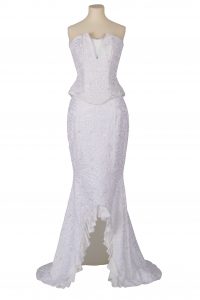 This African lace outfit was worn by Titi Bello, a British Nigerian bride. So called African lace is an embroidered fabric that originates from Austria and is popular across West Africa. Titi explained why she chose this look for her wedding (as told to Collecting Panel member Edith Ojo):

‘The fabric was bought in Austria by Titi Bello, who then commissioned fashion designer, Yemi Osunkoya of Kosibah Designs to make her wedding dress. Titi was inspired by the colour white because she knew she wasn’t going to be wearing white for any of her other events. Titi believes that traditionally the colour white was worn at indigenous Yoruba weddings, and was inspired by that. It was also a colour that her husband, Shola, could wear. She wanted an African flavour during the formal wedding event at the registry, and so chose a colour that both reflected her indigenous Yoruba aesthetics and the Western traditional wedding aesthetics. She was inspired by the dress designer to wear a head wrap, and personally felt more comfortable with the head wrap. She felt it was an authentic look. Titi has always identified as British and Nigerian and so the aesthetics of Titi’s wedding dress felt very natural to her, even though it was a unique aesthetic for its time.’