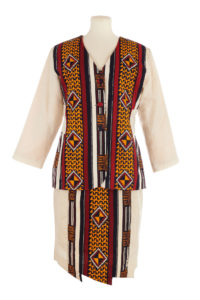 This suit was made for writer Akila Monika Richards by a Ghanaian seamstress based in the UK. She describes the suit and what it meant to her:

‘After my son was born in 1986 and settling into our new family It became increasingly important to connect with my West African heritage. Living in London at the time, I was surrounded by a wide range of diverse Caribbean and African communities with their businesses, famous food market, hairdressers, textile and clothes shops, churches and other worshipping venues. Having been born in Germany of dual heritage, Liberian and German I rarely had the opportunity to connect with people of African descent until I settled in England.

I had always admired how African women dressed in their finery, particularly for special occasions and with new found confidence strived to have an outfit that made a statement in my everyday life. In my travels exploring the English counties of England, a good friend introduced me to a Ghanaian seamstress Abena (born on a Tuesday) who at the time lived in Devon with her family. Abena worked from home. Tailoring helped to support her family in a flexible way. I was shown a wide range of materials, combinations and discussed at length the options available. I decided on a skirt suit made from Kente print and cream linen/cotton textile. Being measured and having such attention paid to detail and popular felt very special to me. I had never had any clothes made for me in this way. I did find out that this is a regular occurrence in most African and Caribbean countries to suit the nations in their particular styles. It not only forms part of an integral economic infrastructure, but also builds lifelong customer relationships, creates family ties based on trust. To be catered for from a regular work outfit to the all-out glorious fine and expensive textile and made clothes for weddings and ceremonies is a matter of pride and expertise.

I decided that my outfit would be worn for both, for special occasions such as Kwanzaa, work functions as well as going out to important events. I required an all-rounder that would make me look smart, that could also be dress up or down and most importantly demonstrated my connection and increasing appreciation for my West African heritage. I travelled once more to Devon visiting Abena for a fitting and decide on the choice of buttons and lining. I liked the jagged hemline in the front and how she inserted the Kente print into the jacket and skirt that made it look unique and unusual. The final result was sent to me by special delivery. Indeed I wore the suit to my first Kwanzaa event in Ladbroke Grove, London and felt very proud in presenting myself with the first outing of my suit. I did not know that attire can give you a sense of belonging and after this first outing I had worn the suit many more times to special occasions such as a naming ceremony, a wedding, cultural events and when I became a spoken word artist and poet at readings and performances at a number of theatres and venues. I am amazed how well the suit carried and kept its shape until it got too small for me. I had kept then for many years in my wardrobe to keep it along with the memory and meaning it held for me.’ Akila Monika Richards

In addition to writing about how she acquired her suit, Akila shared a poem ‘I am Kente’ Download
Scroll Up