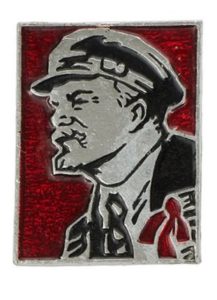 This pin badge features a portrait of Vladimir Lenin, the Russian revolutionary, politician, and political theorist who lead Soviet Russia from 1917-1924. It formerly belonged to Charles Makhuya. In the 1970s Charles was a guerrilla / freedom fighter with the Zimbabwe People’s Revolutionary Army (ZIPRA), the armed wing of the Zimbabwe African People’s Union (ZAPU). ZAPU was backed by the former Soviet Union, hence the inclusion of Soviet literature and iconography in Charles’ collection that was acquired as part of the Fashioning Africa project.