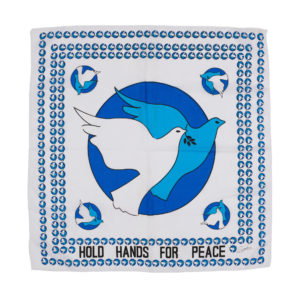 This scarf was acquired from South African textile historian Juliette Leeb-du Toit. She bought it from a charity shop around 2010 but it dates from the early 1990s. In the years leading up to the end of Apartheid doves were used as a symbol of the hope for peace in the country. Juliette recalls pin badges of doves being handed out to children at schools nationwide. Interestingly, while doves are associated with peace in many cultures, in the folklore of Southern African communities the dove has other significant associations including war, since male doves and pigeons are known to fight to the death. Collected as part of the Fashioning Africa Project.