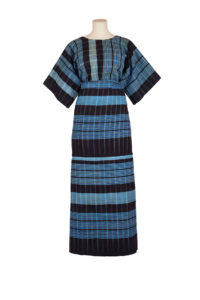 This indigo buba, iro and gele was bought by the owner, Rounke, in Nigeria in the late 1970s. She remembers wearing it to a party when she was a university student in the early 1980s. It is made from woven blue striped cotton fabric. A buba is a tailored blouse, customarily worn by Yoruba women with an iro (wrap skirt), pele (shawl) and gele (headwrap) as a matching outfit. Collected as part of the Fashioning Africa project.

Brighton Museum recorded an oral history with Rounke where she discussed her memories of shopping for and wearing aso-oke. She said of this outfit:

When I was at the University of Reading, I became the president of the Africa Society and I wore the aso oke I’ve donated to the museum there because it [the traditional aso oke] wasn’t going to get ruined – you know this might have got ruined [indicates aso oke brought to the interview]. That was a cheap, cheap type that my friend’s mother had given me. When I say ‘cheap, cheap’ I don’t mean it was cheap, it wasn’t cheap but it was cheaper than this. [Yeah] And I wore that – because I was president of the society, I felt I needed to look presidential and I did!

Rounke is a writer and shared one of her pieces of creative non-fiction with the museum, available to download here.
The Benefits of Being a ‘Wife’, a story about aso-oke, written by Ireti Coker (Rounke’s pen name). Commissioned by Writing Our Legacy, for a Brighton Museum event in 2016.
Download
Scroll Up