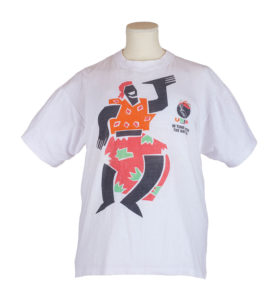 This T-shirt in support of UNIP was produced in Zambia for the 1991 election, the first multi-party election in the country since 1968. UNIP is an acronym for the United National Independence Party, a socialist party that had governed Zambia from its independence in 1964. The party comprehensively lost the 1991 election to the Movement for Multi-Party Democracy. Collected as part of the Fashioning Africa project.