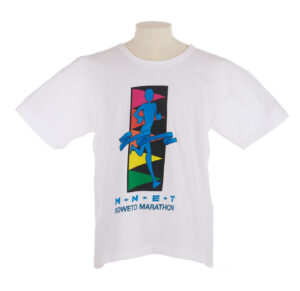 This T shirt was produced to celebrate the first Soweto Marathon that took place in 1993, a politically momentous time in South African history when the apartheid system was ending. This was the first marathon to take place in a township and it has now been running for 27 years. This type of T shirt has evolved from the ‘protest’ or ‘struggle’ T shirt that became popular in South Africa during the anti-apartheid movement.

The back of the T shirt features two doves. This logo is found on other objects acquired from South Africa at this time. Interestingly, while doves are associated with peace in many cultures, in the folklore of Southern African communities the dove has other significant associations including war, since male doves and pigeons are known to fight to the death. Collected as part of the Fashioning Africa Project. Collected for the Fashioning Africa Project.