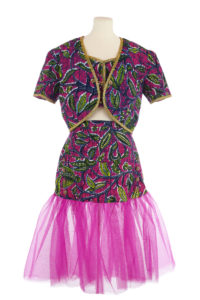 This outfit was made by Joma Wellings-Longmore, who wore it as a guest to a wedding in the 1990s. The look included a pink mesh headwrap which matches the skirt (collected but not pictured). Joma spoke to collecting panel member Edith Ojo about the inspirations behind the outfit.

Edith explains: ‘It is a bold statement of two cultures Joma was influenced by at the time she made it – Nigerian (given Joma’s heritage) and Jamaican (Joma’s husband at the time was Jamaican). It was made by Joma when she lived in Harlesden in the mid-90s and was made to reflect the Jamaican street culture of the time. The outfit as described by Joma is a fusion of Jamaican Ragga using Nigerian print fabric. The style was chosen to enable/emphasise dramatic movement in dancing. Though Joma chose a fabric that was very bold and reflected her African aesthetics, the style of the outfit was a departure from the more conservative styles that was worn by Nigerians at the time. The style allowed for the more physical dance styles of Ragga, however the more conservative Nigerian styles would have restricted such movement. The outfit was designed to reflect Joma’s spirit and her love of dance and dancing.’ Collected as part of the Fashioning Africa project. 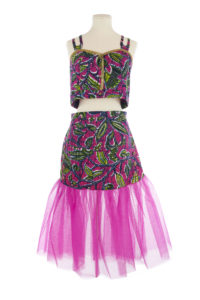 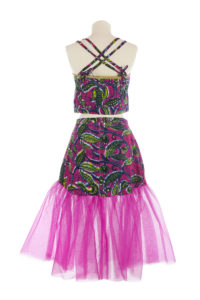 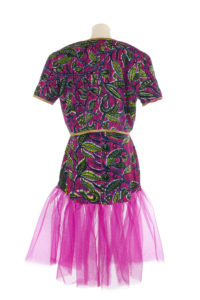