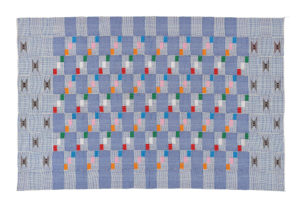 This women’s kente cloth was made by Ewe weaver, Atsu Eboe. The technique used to create this cloth is called ‘Soge’, meaning lighting or thunderbolt, and it is made in the coastal southern Volta region. Weavers use two sets of warp threads to produce this type of cloth. This a particular feature of Ewe produced textiles in the Volta region, and may have been invented by Ewe weavers. Purchased directly from the weaver on a visit to weaving workshops in Agbozume. Collected in Ghana as part of the Fashioning Africa project.