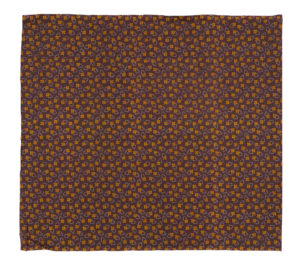 This fabric is called shweshwe, an iconic printed cotton textile that is so popular it has become known as the denim of southern Africa. The name shweshwe is derived from King Moshoeshoe I of Lesotho (c. 1786 – 1870) who first popularised it. It is also known as German cloth after the Swiss and German settlers who imported the cloth to South Africa. The fabric is made by Da Gama and the ‘Three Cats’ shweshwe brand logo is stamped on the back of fabric as a mark of authenticity. Originally shweshwe was made in blue or brown, but now also comes in a variety of bright colours. Collected in South Africa as part of the Fashioning Africa project.