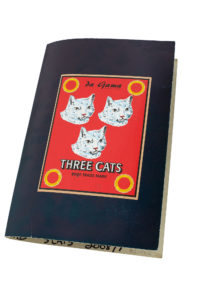 This sample book or catalogue was produced by Da Gama to showcase their range of shweshwe fabrics to textile buyers. Shweshwe, or German cloth as it is also known in some areas, is a printed cotton fabric that is so ubiquitous in southern Africa that it has been called the denim of the region. Shweshwe was traditionally made in indigo and white and brown and white, but numerous colours and styles are now made. The ‘three cats’ logo on the front cover is a easily recognisable design, and all shweswhe produced by Da Gama has the ‘three cats’ logo stamped on the back of the cloth. Collected in South Africa as part of the Fashioning Africa project.