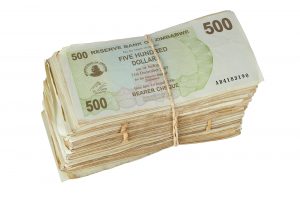 This bundle of paper money from Zimbabwe, in Z$500 notes, is a relic from 2007, when Zimbabwe experienced monetary instability, subjecting the currency to hyperinflation. It was the first case of hyperinflation in the 21st Century. This money belonged to Charles Makhuya, a guerrilla / freedom fighter with the Zimbabwe People’s Revolutionary Army (ZIPRA) in 1970s. It amounted to one month of a war veteran pension, but due to this hyperinflation, it was worth less than a loaf of bread. Collected as part of the Fashioning Africa project.