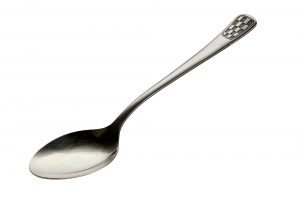 This spoon was made in Cuba and issued, as part of a kit, to soldiers in the Zimbabwe People’s Revolutionary Army (ZIPRA), an armed faction of the socialist Zimbabwe African People’s Union (ZAPU) political party. The spoon belonged to Charles Makhuya, a guerrilla/freedom fighter with ZIPRA in the 1970s. Collected as part of the Fashioning Africa project.