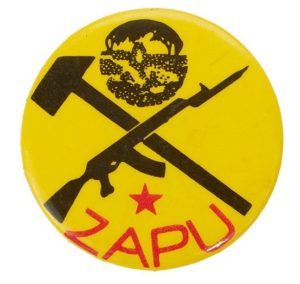 This pin badge features the acronym for the Zimbabwe African People’s Union, a political party and national liberation movement formed in 1961, which sought majority rule in Southern Rhodesia and fought for Zimbabwe’s independence. It formerly belonged to Charles Makhuya. In the 1970s Charles was a guerrilla / freedom fighter with the Zimbabwe People’s Revolutionary Army (ZIPRA), the armed wing of ZAPU. Collected as part of the Fashioning Africa project.