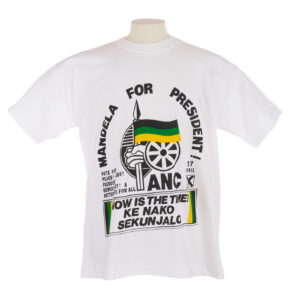 This T shirt is one of many designs produced for the South African presidential elections held in 1994. It was worn by a supporter of the African National Congress (ANC) party and their candidate Nelson Mandela, who became South Africa’s first black head of state. It features the slogan ‘Now is the Time’ in English, Sesotho and isiZulu, demonstrating the diversity of cultures and languages in South Africa. This form of ‘protest’ or ‘struggle’ T shirt became popular in South Africa during the anti-apartheid movement. Collected as part of the Fashioning Africa project.