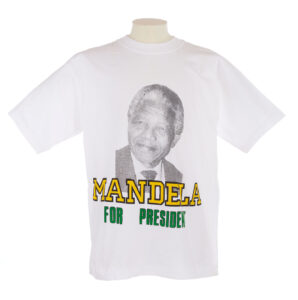 This T shirt is one of many designs produced for the South African presidential elections in 1994. It was worn by a supporter of the African National Congress (ANC) party and their candidate Nelson Mandela, who became South Africa’s first black head of state. This form of ‘protest’ or ‘struggle’ T shirt became popular in South Africa during the anti-apartheid movement; wearing garments that make a political statement continues to be popular across Africa. Collected for the Fashioning Africa Project.