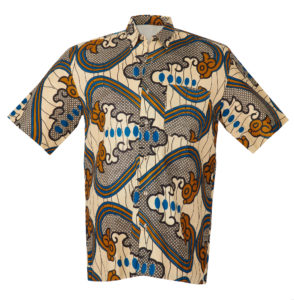 This wax print shirt was given to the donor as a gift by his hosts when visiting the University of Ghana. The design is an example of traditional Indonesian influenced wax print. Also called Dutch wax or Ankara, wax print has a history that is tied up with colonialism. Originally inspired by Javanese batik designs from Dutch colonies in Indonesia, Dutch manufacturers began mass producing printed textiles which mimicked the look of wax resist batik in the late 19th century. Around the same time, West African soldiers who had been recruited to serve in the Royal Netherlands East Indies Army returned from Indonesia and introduced batik prints to West Africa. The Dutch manufacturers, who had hoped to sell their mass-produced fabrics in Indonesia, found that they were able to sell to the new market in West Africa. While wax print has remained popular, since independence from colonial rule, there has been an emphasis on locally manufactured fabrics from brands such as GTP. Collected as part of the Fashioning Africa project.