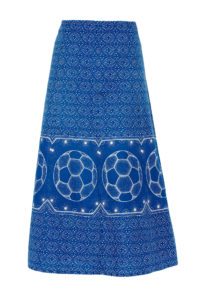 This skirt is made from shweshwe fabric, printed by da Gama and tailored by ‘Alfalfa’ clothing label. Shweshwe is a printed cotton fabric that is so ubiquitous in southern Africa that it has been called the denim of the region. The skirt belonged to Dr. Catherine Elliot Weinberg, an African heritage researcher. She is a UK based South African who grew up in Johannesburg. She purchased it from Young Designers Emporium, Rosebank, Johannesburg. It was one of Catherine’s favourite garments, she states ‘I wore the skirt quite a bit, as it is a very flattering style. Probably the most glamorous occasion I wore it to was at a charity auction in aid of an African cause held in London circa 2004.’ Collected as part of the Fashioning Africa project.