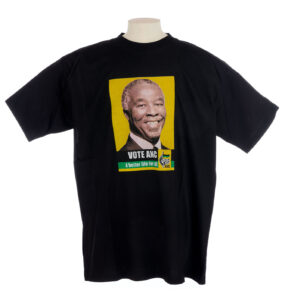 This T shirt was produced for a South African presidential election. These were worn by supporters of the African National Congress (ANC) party and their candidate Thabo Mbeki. Mbeki became South Africa’s second black head of state in 1999, preceded by Nelson Mandela. It belonged to Dr. Catherine Elliot Weinberg, a UK-based South African who grew up in Johannesburg. She recalls: ‘…a family member attended an ANC rally at Gallagher Estate, Midrand [Gauteng Province] circa 2000 and obtained the T-shirt. It somehow never got worn and then became more of a souvenir.’ This form of ‘protest’ or ‘struggle’ T shirt became popular in South Africa during the anti-apartheid movement. Collected as part of the Fashioning Africa project.