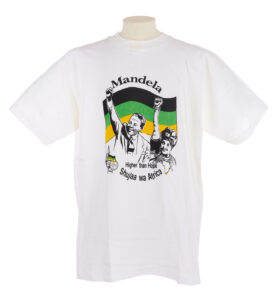 This T shirt was created to promote political change in Kenya and demand a return to a democracy. Inspired by the events in South Africa at the time, the T shirt depicts Nelson and Winnie Mandela, and celebrates Mandela’s release from prison and the African National Congress Party (ANC). Underground activitists such as Zarina Patel and Zahid Rajan, who the Museum acquired this T shirt from, produced these ‘protest’ or ‘struggle’ T shirts depicting historical victories, as a form of resistance. Wearing such a shirt was a way of communicating with fellow Kenyans, and encouraging them to fight against imperialism and promote political change. Collected as part of the Fashioning Africa project.

Zahid explains: ‘We worked in the Underground in the 1980s. Our aim was to demand a return to multi-partyism, President Moi had declared Kenya to be a de jure single-party state. The longer term aim was for ideological change and to step up the struggle against Imperialism by politicizing and mobilizing fellow Kenyans. One of methods we used was to depict historical instances of protest and resistance on T-shirts, calendars and greeting cards for the general public. Mandela and Winnie are shown on this T-shirt as victorious when Madiba was released from prison.’