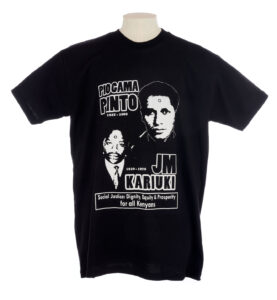 This T shirt was produced to commemorate the deaths of two prominent Kenyan activitsts and martyrs. Activitists such as Zarina Patel and Zahid Rajan, who the Museum acquired this T shirt from, produced and wore these ‘protest’ or ‘struggle’ T shirts as a form of resistance and commemoration. They have amassed a collection of protest T shirts from campaigns they have been involved in over the years. Collected as part of the Fashioning Africa project.

Zahid said of this shirt:

‘Pinto is one Kenya’s most loved martyrs. He was assassinated in 1965 as he opposed the greed and ethnic self-interest of the Jomo Kenyatta clique. He worked to free Kenya from colonialism and build an independence that would benefit ALL Kenyans. J M Kariuki was a wealthy politician of the same ethnicity as Kenyatta; he had been detained in the Mau Mau War of Liberation. Post-independence he was appalled by the greed of the elites and declared Kenya to be ‘a nation of 10 millionaires and 10 million beggars’. He was assassinated very brutally in 1975. This T-shirt was printed in 2014 when we commemorated the deaths of these 2 great Kenyan patriots.’