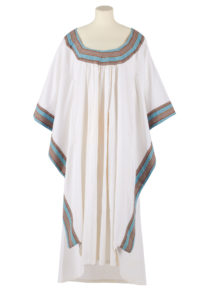 This vintage kaftan previously belonged to a wealthy American tourist who bought it while on safari in Kenya in the 1980s. It was produced by African Heritage Ltd, a gallery co-founded by former vice-president of Kenya, Joseph Murumbi, his wife Sheila, and American Alan Donovan. The gallery, which expanded from a shop to a huge operation with two mammoth galleries, restaurants, and boutiques, took a Pan African approach, and showcased crafts, textiles and jewellery from across the continent for an international audience. Collected as part of the Fashioning Africa project.