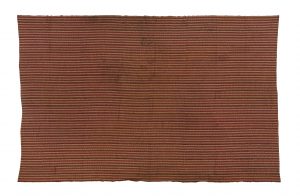 This men’s narrow strip woven kente cloth was made by Ewe weaver John Kwasi Dometi in 1980. This type of cloth is called ‘Worgbale’, or python skin. The cloth was owned by Jonathan ‘Old Man Young Boy’ Akakpo, and was created for him by the weaver who was father to Esther Dometi, Jonathan’s late wife. The cloth was purchased from Jonathan on a visit to his home in Kpetoe, to interview Jonathan and his son Sylanvus about their lives and the significance of kente in their community. Collected in Ghana as part of the Fashioning Africa project.