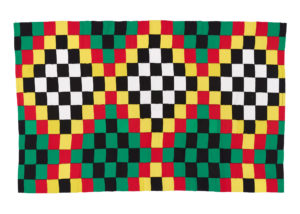 This is a narrow strip woven rayon kente cloth. This type of cloth is known as ‘Titriku’ or thick cloth, and always features a square block design. It is a very popular cloth design that has been woven in the Agotime region since at least the early 20th century. This example was woven at a workshop run by twins Fred and Richmond Akpo. The twins were taught to weave by their uncle when they were 14. When they left school they began to weave full-time and started their own weaving workshop. They employ young men, and also train boys to weave after school and pay their school fees in return for their labour. When asked why they train the boys, they replied ‘So they too will have a skill to make a living from’. Commissioned by Brighton Museum as part of the Fashioning Africa Project.

Nene Nuer Keteku III, Paramount Chief of Agotime, dressed in a titriku kente cloth and chiefly adornments on his throne or seat of office, at his home in Agotime Kpetoe, 2017.

Nene Keteku is the Paramount chief of the Agotime Kpetoe, where the twins are based. During our trip we managed to get an audience with Nene Keteku, he showed us some of his special kente cloths which he wears as his Chiefly attire on official occasions, (including a Titriku) and he also explained the significance of these kente cloths made and worn in his community.