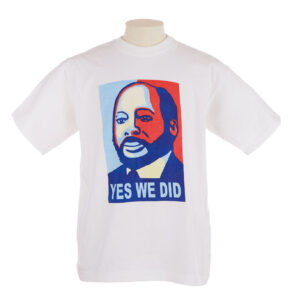 This T shirt was produced to celebrate South Sudan Independence Day on July 9th 2011. It features John Garang de Mabior, leader of the Sudan People’s Liberation Army during the second Sudanese civil war. He was influential in the movement which led to the founding of South Sudan but did not live to see it, having died in a helicopter crash in 2005. The design of the shirt is inspired by Barack Obama’s 2008 US presidential campaign, with the slogan ‘Yes We Did’ playing on Obama’s ‘Yes We Can’, while the image recalls the iconic ‘hope’ poster designed by Shepard Fairey. Collected as part of the Fashioning Africa Project.